Work has begun on recreating the original 1215 Magna Carta. This photograph is a small portion of the document being produced: 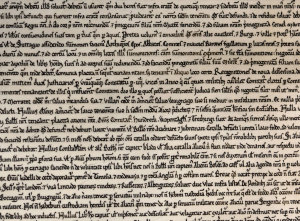 Margaret Layson has begun work on the world’s latest edition of the original 1215 Magna Carta. She said:

Using a quill taken from a goose, Margaret is writing by hand the Medieval Latin on a piece of parchment from the UK. The parchment used, treated animal skin, is exactly the same material used in 1215, which will last much longer than paper, hopefully for another 800 years!

Each scribe had his own individual style and abbreviations. The Salisbury edition of the Magna Carta from which she is writing this edition was written by the one person. It is not known whether the scribe was chained to his desk, as was the fate of many scribes until they had finished their work. Margaret says she plans to finish this edition by Christmas without being chained.